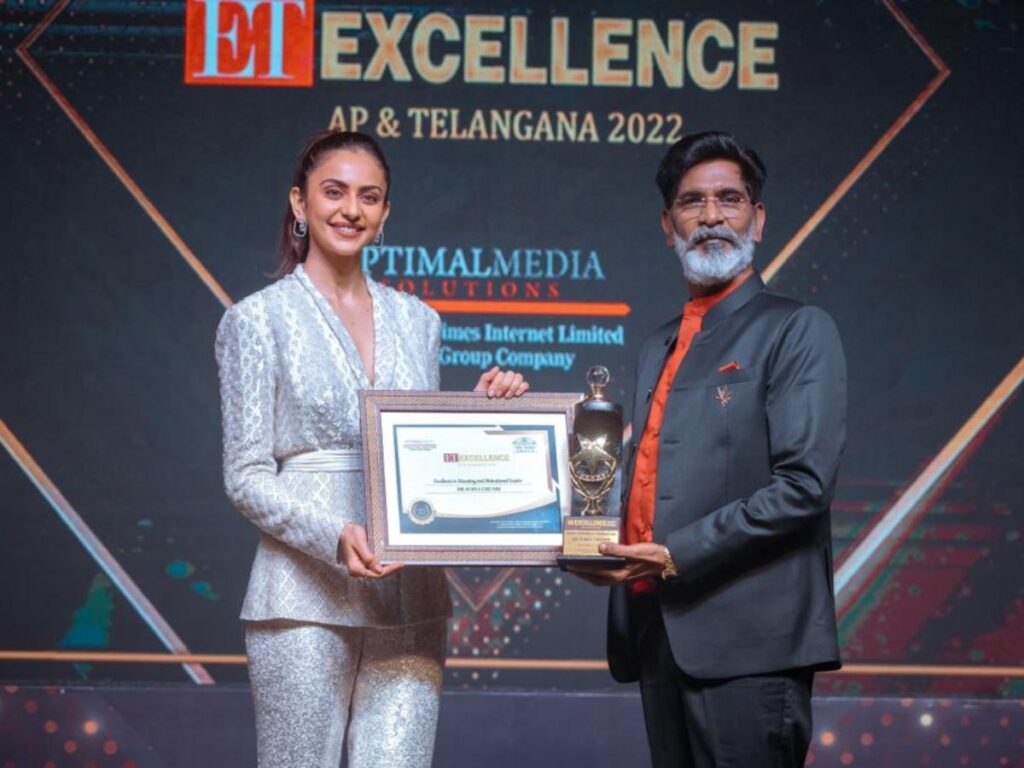 Hyderabad (Telangana) [India], June 23: Top leaders from the world of business picked the winners of “ET Excellence Awards AP & TELANGANA 2022”, who were felicitated in a grand ceremony held on June 18 at The Westin Hotel, Hyderabad in the presence of top dignitaries and celebrities. And one such winner from Hyderabad was education revolutionist Dr. Surya Chundi, who was presented the Economic Times Excellence Award for ‘Excellence in Educating and Motivational Leader’ by Bollywood-Tollywood actress Rakul Preet Singh.

The award was honoured to those who have made a constitutional difference in how business is done and excelled in the said field. And one such winner, Dr. Surya Chundi, born in Vijayawada, dedicates this award to his mother Kamala and father Srinivas for a humble upbringing and for making him what he is today. He is recognized by the International Economics University, Malaysia and was awarded a Doctorate in Education and Leadership. “The value-based education system imparted in me provoked me to walk along a path that can help change numerous families and societies. To achieve this goal, I had countless conversations with the parents of those students who approached me for directions. The first advice is to overlook traditional education methods that are very ‘book-oriented’. My primary intention has been to bring about a small change in the thought process of parents, in a way that their children are contributing to the world’s communities to a considerate extent,” said Dr Surya Chundi.

Dr Surya Chundi plays a role model in awakening society by asking them not to rob the children of tomorrow through a traditional educational system. His work has taken him to all corners of Southern India, where he has interacted not just with students and their families but also with various educational institutions responsible for nurturing tomorrow’s citizens. He is proud of his connections with nearly 700+ junior colleges, graduate institutions and Universities across South India. And he is on his journey to extend his work to the Central and Western parts of the country to reach more students to achieve his goal of a cultured and peaceful society. “The children of today are citizens of tomorrow,” he says.

Moreover, Dr Surya Chundi aims to reach as many institutions and families beginning from his home town and gradually extending these workshops to other parts of the country. And also carried his message to a larger crowd, including the Honorable Prime Minister of India, to fulfil his dream of creating a safer and stronger society for women by implementing martial arts as part of extra-curricular activity to stop Violence against women.